App info:Save up to 80% on your prescription drug costs!**GoodRx can save you hundreds of dollars a month, even if you have insurance or Medicare.**Most Americans don't know that prescription prices vary wildly from pharmacy to pharmacy. There's never been a way to compare drug prices - until now. Go... Read More >

The description of GoodRx Drug Prices and Coupons

Save up to 80% on your prescription drug costs!

**GoodRx can save you hundreds of dollars a month, even if you have insurance or Medicare.**

Most Americans don't know that prescription prices vary wildly from pharmacy to pharmacy. There's never been a way to compare drug prices - until now.

GoodRx makes comparing prescription drug prices easy. Our app provides current cash and sale prices, coupons and valuable savings tips for thousands of prescriptions at pharmacies near you. GoodRx tells you which pharmacies have drugs for less than $4 per fill, and some where certain prescriptions for free!

Best of all, GoodRx coupons can be used from within the app - simply hand your phone to the pharmacist to save up to 80%! No need to print out anything - find savings on the go!

GoodRx is 100% free to use - there are no fees or obligations to you. You can use GoodRx for every member of your family, including pets.

GoodRx has been featured by Consumer Reports, The New York Times, PBS, ABC News, Forbes, CNN, The LA Times and more. Our app is used by hundreds of doctors and clinics to help save patients money on their medications.

Here's what GoodRx users are saying:

"I am still in shock!!! I called my doctor to cancel the prescription he ordered for me due to the cost. Then I found GoodRx. I brought your coupon to Walgreens and wound up paying $40.20 instead of the $452.97 that was their original cost. You guys are literally a lifesaver! The pharmacist was as surprised as I was. Thank you so much!"

“As a doctor, I’m always interested in saving money for my patients. GoodRx helps my patients afford the drugs they need - and it’s so easy!”

"I decided to give your site a spin and was pleasantly surprised to see you guys saved my $50 a month right off the bat. Not a bad bonus for a first time user!"

By downloading GoodRx, you agree to be bound by our Terms Of Use. Read more at http://www.goodrx.com/terms-of-use

Start saving on your prescriptions with GoodRx! 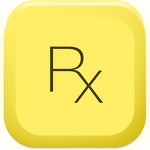